Abstract
Soybean [Glycine max (L.) Merr.] is an excellent source of protein, oil, carbohydrates, and many other bioactive ingredients. However, its raw mature seeds also contain several antinutritional components. The newly developed soybean cultivar ‘Hayoung’ has large yellow seeds and a low stachyose content, and is free of lipoxygenase, Kunitz trypsin inhibitor (KTI), and 7S α’-subunit proteins. ‘Hayoung’ was selected from the population derived from a cross between the intermediate parent (F4-4) and the breeding line (15G1). It has purple flowers, tawny pubescence, a determinate growth habit, and light-yellow pods at maturity. The seed of the cultivar has a yellow hilum and yellow seed coat color. The dry weight seed protein and oil content were 37.9 and 16.0%, respectively. The stachyose content was 3.1 g/kg, which was much lower than 12.7 g/kg of the check cultivar, ‘Daewon’. ‘Hayoung’ has shown resistance to soybean necrosis, soybean mosaic virus, Cercospora leaf spot and blight, black root rot, pod and stem blight, and bacterial pustule. ‘Hayoung’ matured on 22 October with a plant height of 56 cm and a 100-seed weight of 32.3 g. The average yield of the cultivar was 3.12 (Ton/ha), based on regional yield trials in 2018 at four locations. ‘Hayoung’ has been registered as a soybean cultivar (registration number: 8625, registration date: June 08, 2021) by the Korea Seed & Variety Service, Republic of Korea.
Keywords : soybean, Hayoung, lipoxygenase, KTI, 7S α'-subunit, stachyose, large seed size

Because of these antinutritional factors and allergens that exist in raw soybean seeds, heat treatment or other methods are needed to eliminate or reduce these components and secure the efficiency of nutrient absorption and food safety. But these treatments cause some changes and reducs soybean quality (Chen et al. 2019). Also, heat inactivation of the lipoxygenase at an industrial level not only incurs extra cost but also affects the solubility and functionality of proteins (Macleod & Ames 1988). Even after heat treatment and fermentation, antigenic proteins remain in soybean food (Wilson et al. 2008). Genetic removal or reducing of antinutritional and allergenic factors such as lipoxygenase, KTI, 7S α’ subunit protein and stachyose that exist in mature soybean seeds is needed in the soybean food industry. So far, ‘Jinpumkong’ and ‘Chosen’ cultivars that are lipoxygenase-2,3 protein free and ‘Jinpum#2’, ‘Miso’, and ‘Jinyang’ cultivars that are lipoxygenase-1,2,3 protein free have been released (Kim et al. 1996, Kim et al. 1997, Chung 2014, Kim et al. 2015, Chung 2017). Also, ‘Gaechuck#1’ and ‘Gaechuck#2’ cultivars with an absence of lipoxygenase-2,3 protein and KTI protein have been released (Chung 2009a, Chung 2009b). A soybean cultivar with large yellow seeds that is free of lipoxygenase, KTI, and 7S α’ subunit proteins and has low stachyose content was developed.

The presence or absence of 7S α' subunit protein and KTI protein in each of the F2 seed was tested by SDS- PAGE and western blot analysis, respectively. F2 seeds were planted in May 2010. Single F2 plants were harvested based on plant type, height and maturity. Random F3 seeds of each F2 plant harvested were analyzed to select strains with low stachyose content (rs2rs2 genotype) by HPLC. Thirty lines free of 7S α' subunit and KTI proteins and with low stachyose content were planted and harvested in 2011. The pedigree selection method was used through F5 and F7 generation to select plants with a yellow seed coat, large seed size, free of lipoxygenase, KTI, and 7S α' subunit proteins and low stachyose content. One F8 line with acceptable agronomical traits such as flowering date, maturity date, growth habit and lodging was selected in 2015. Qualitative and quantitative traits were recorded in 2018 at a location in Jinju. Agronomic traits such as lodging, shattering and reaction to disease were recorded according to the standard soybean cultivation manual of the RDA, Korea. Yield, protein and oil content, and insect resistance were tested by the Korea Seed & Variety Service. Genealogical diagram and selection procedures are shown in Fig. 1 and Fig. 2.

Confirmation of lipoxygenase and 7S α' subunit proteins by SDS-PAGE

Crude protein from the random seed of the check cultivar (‘Daewon’) and ‘Hayoung’ was obtained to identify the presence (‘+’) or absence (‘−’) of lipoxygenase and 7S α' subunit proteins. Part of the cotyledon from random seeds was removed and incubated for 30 min in 1 ml of Tris-HCl, pH 8.0, and 1.56% v/v β-mercaptoethanol. About 50 μl of the supernatant through centrifugation was added to an equivalent amount of 5X sample buffer containing 1 M Tris-HCl, pH 6.8, 50% v/v glycerol, 1.96% v/v β-mercaptoethanol, and 10% w/v sodium dodecyl sulfate (SDS). The sample obtained was boiled at 97°C for 5 min and centrifuged. About 2 μl of the supernatant was loaded on a 12% acrylamide SDS polyacrylamide gel electrophoresis medium gel from Owl Separation Systems, Inc (Model: P9DS, Portsmouth, NH USA). After electrophoresis at 120 V for 7 h, gels were stained. The gels were destained in destaining solution for several hours. The presence or absence of lipoxygenase protein (97 kDa) and 7S α' subunit protein (72 kDa) was confirmed.

Proteins obtained from the seed of the check cultivar (‘Daewon’) and ‘Hayoung’ were separated by 12% SDS-PAGE, and transferred onto an Immobilon-P membrane (PVDF, Millipore). After blocking for 2 h in TBS buffer containing 0.1% Tween 20, 20 mM Tris (pH 7.5), 150 mM NaCl, and 5% nonfat dried milk (Carnation, Glendale, CA), the membrane were incubated with the antibody of KTI and lectin protein for 1 h. The blot was incubated with a horseradish peroxidase conjugated secondary antibody after washing in TBS buffer. Using an enhanced chemiluminescence kit (Amersham, Buckinghamshire, UK), the complex was visualized. The presence or absence of KTI protein was determined visually.

The content of crude protein and oil for ‘Hayoung’ and check cultivar (‘Daewon’) was analyzed by the Soxhlet method and semimicro-Kjeldahl method, respectively. Stachyose content for ‘Hayoung’ and ‘Daewon’ cultivars was detected by HPLC (Sung et al. 2014).

Disease performance was conducted at a research field of Gyeongsangnam-do Agricultural Research & Extension Services in 2018. The ‘Daewon’ cultivar was used as a check cultivar. Twenty plants were used for the disease test. Necrosis and mosaic virus symptoms were investigated at V2 stage. Black root rot and bacterial pustule symptoms were investigated at R1 stage. Response of cercospora leaf spot and blight and symptoms of pod and stem blight were checked at R8 stage. Disease reaction was visually rated using a scale from 1 to 9 according to the Agricultural Science and Technology Research and Analysis Criteria (2012, Rural Development Administration).

Qualitative traits of ‘Hayoung’ are presented in Table 1. ‘Hayoung’ has purple flowers, tawny pubescence, a determinate growth habit, oval leaflet shape, and light yellow pods at maturity. The seed of ‘Hayoung’ has a yellow hilum and yellow seed coat color. The cotyledon color of the mature seed is yellow.

Quantitative characteristics of ‘Hayoung’ determined by regional yield trial in 2018

Characteristics for seed components of ‘Hayoung’ estimated in 2018 at Jinju

Random seeds of ‘Hayoung’ and ‘Daewong’ were used to confirm the absence of lipoxygenase, KTI, and 7S α' subunit proteins (Fig. 3). 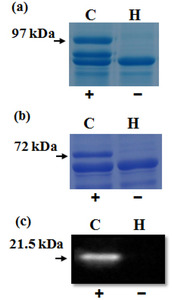 Plants and seeds of ‘Hayoung’ are shown in Fig. 4.

Resistant degree of ‘Hayoung’ to soybean disease estimated in 2018

The soybean cultivar ‘Hayoung’, with large yellow seeds, free of lipoxygenase, Kunitz trypsin inhibitor (KTI), and 7S α'-subunit proteins and that has low stachyose content, was developed. ‘Hayoung’ was selected from the population derived from the cross between an intermediate parent (F4-4) and breeding line (15G1). ‘Hayoung’ has purple flowers, tawny pubescence, a determinate growth habit, and light yellow pods at maturity. The seed of ‘Hayoung’ has a yellow hilum and yellow seed coat color. Seed protein and oil content on a dry weight basis were 37.9 and 16.0%, respectively. ‘Hayoung’ flowered on August 4, which is 5 days later than ‘Daewon’. ‘Hayoung’ matured on October 22, which is 2 days earlier than ‘Daewon’. The plant height of ‘Hayoung’ was 56 cm compared to the check cultivar (‘Daewon’) with 46 cm. The lodging score of ‘Hayoung’ was 0. The 100-seed weight of ‘Hayoung’ was 32.3 g larger than that of ‘Daewon’ (29.0 g). The stachyose content of ‘Hayoung’ was 3.1 g/kg, which was much lower than 12.7 g/kg of the check cultivar, ‘Daewon’. ‘Hayoung’ had a shattering score of 2.0 versus ‘Daewon’ with a score of 1.0. The average yield of ‘Hayoung’ was 3.12 ton/ha in 2018. ‘Hayoung’ showed resistance to soybean necrosis, soybean mosaic virus, Cercospora leaf spot and blight, black root rot, pod and stem blight, and bacterial pustule. ‘Hayoung’ has been registered as a soybean cultivar (registration number: 8625, registration date: June 08, 2021) by the Korea Seed & Variety Service, Republic of Korea.